Have you lost your Glenville High School class ring? Have you found someone's class ring? Visit our Tarblooders lost class ring page to search for your class ring or post information about a found ring.

Charles Moss
Class of 1963
Navy, 4 Years
Bring the draft back!!
Report a Problem

Evelyn (Harris) Smith
Class of 1966
Navy, 5 Years
Stationed in South Carolina and Texas for 5 yrs and 2 yrs more in reserves
Report a Problem

John A. Rodgers
Class of 1973
Marine Corps, 3 Years
I served as a teletype/ limited crypto repairman, and marksmanship training coach.
Sea duty served with the 34th. M.A.U. Seventh Fleet/FMF. Lant. I was honorably discharged
as a Corporal.

Lamont Davis Gibson
Class of 1964
Air Force, 22 Years
I entered the U.S. Air Force after High School; Served in Vietnam; Retired USAF as a Lt Col; Served in Iraqi and Afghanistan as a civilian; Retired as an executive from the U.S. Federal Government; Volunteer as Post Commander and Chief Finance Officer for a large American Legion Post in Maryland; Served as All State VFW District Commander and All American VFW Post Commander; and Enjoying retirement and helping Veterans.
Report a Problem

Lee Benson
Class of 1971
Army, 3 Years
Served in US Army as Supply Specialist stationed in Germany,
Report a Problem 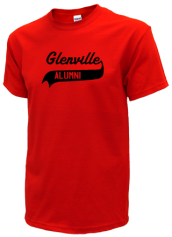 Read and submit stories about our classmates from Glenville High School, post achievements and news about our alumni, and post photos of our fellow Tarblooders.

The Dennis T. Woods Field Dedication will be on July 7, 2012 at the former Glenville Recreation Field. The time of the e...
Read More »

View More or Post
In Memory Of
Our Glenville High School military alumni are some of the most outstanding people we know and this page recognizes them and everything they have done! Not everyone gets to come home for the holidays and we want our Glenville High School Military to know that they are loved and appreciated. All of us in Cleveland are proud of our military alumni and want to thank them for risking their lives to protect our country!