Have you lost your Gilbertsville-mount Upton High School class ring? Have you found someone's class ring? Visit our Raiders lost class ring page to search for your class ring or post information about a found ring.

Tyler W. Peck
Class of 2009
Army, 3 Years
Tyler is a 1st Lt. currently stationed at Fort Drum where he is a Black Hawk helicopter pilot.
Report a Problem

William DeGroat
Class of 2006
Navy, 3 Years
Stationed on the only foward deployed Aircraft carrier USS George Washington, CVN-73, with a Helicopter Squadron, HS-14. I have a little bit or exp. in working on the helicopters doing basic maintenance proceedures, ie: serivcing engines, and doing Daily inspections on the Aircraft to clear them good for flight, and also have exp. in the admin side of the maintenance body as well.
Report a Problem 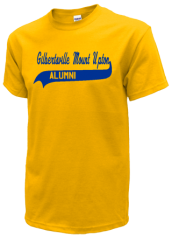 Read and submit stories about our classmates from Gilbertsville-mount Upton High School, post achievements and news about our alumni, and post photos of our fellow Raiders.

Post Your News
In Memory Of
Our Gilbertsville-mount Upton High School military alumni are some of the most outstanding people we know and this page recognizes them and everything they have done! Not everyone gets to come home for the holidays and we want our Gilbertsville-mount Upton High School Military to know that they are loved and appreciated. All of us in Gilbertsville are proud of our military alumni and want to thank them for risking their lives to protect our country!